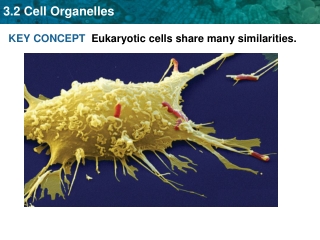 KEY CONCEPT Eukaryotic cells share many similarities. Cells have boundaries. The Plasma Membrane. • Forms a boundary between a cell and the outside environment • Controls the passage of materials into and out of the cell • Helps to maintain homeostasis. Wastes. Oxygen. The Similarities and Differences of Animal and Plant Cells Created by C. Rhein Hazelwood Central - Cells. the

WARM UP: Tuesday, Sept 17 - . reminder: write the warm up in your 3 brad folder list 3 similarities between prokaryotic

Diversity of Living Things - . 3.1: fungi. plants &amp; fungi. fungi have many similarities to plants, but the

Topic 2.3 Eukaryotic Cells - . assessment statements. 2.3.1: draw and label a diagram of the ultrastructure of a liver