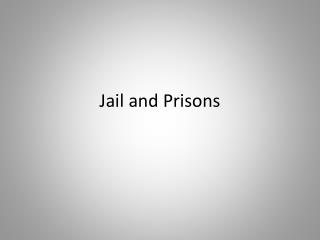 Jail and Prisons . County Jail. Typical day for an Inmate: You should expect an alarm to wake up at about 6:00am Prisons - Should we be spending more money on these?. prisons. exam question. explain, in detail, why some people think

Prisons - . prisons. also referred to as penitentiary and correctional facilities people in prison are said to be

Jail Roster-Country Jail - A county jail is a facility that be commonly associated with a federal prison. the words

Prisons - . a prison is a state or federal confinement facility that has custodial authority over adults sentenced to

Private Prisons - . by yixin shen and patrick shin. private prisons are…. prisons that are run by third parties that

Private Prisons - . the argument for: privatization as an ideology control government spending better service for less

Jail Break - . here are 4 of the 100 prisoners in our jailhouse. since these prisoners are very dangerous they need to