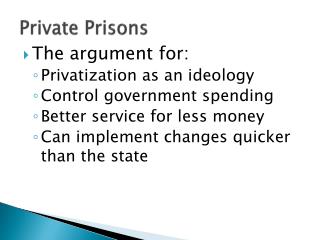 Private Prisons - . by yixin shen and patrick shin. private prisons are…. prisons that are run by third parties that

Prisons - Should we be spending more money on these?. prisons. exam question. explain, in detail, why some people think

Prisons - . prisons. also referred to as penitentiary and correctional facilities people in prison are said to be

Prisons - . a prison is a state or federal confinement facility that has custodial authority over adults sentenced to

Inside America's prisons - A look inside u.s. prisons, as president barack obama becomes the first sitting president to