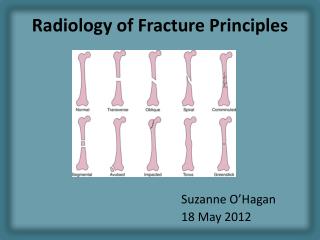 Radiology of Fracture Principles. Suzanne O’Hagan 18 May 2012. Radiographic Principles. When analysing and ordering x-rays you should remember the rule of two’s:    Two views . At 90 degrees, usually anterior-posterior and lateral. Two joints . The joints above and below.

ACR-RFS Overview - . a brief introduction to the american college of radiology. acr mission. to serve patients and

Recognizing fractures - . dr. ahmed refaey. frcr. definition. fracture. fracture. a disruption in all or part of the

The Resident as a Professional in Radiology - . self-learning module. association of program directors in radiology

General Principles in the Assessment and Treatment of Nonunions - Definitions. nonunion: a fracture that has not and is