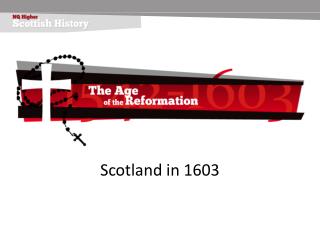 ABPI Scotland: Medicines in Scotland - . what is abpi?. membership body of the pharmaceutical industry – statutory

Constitutionalism in England 1603-1689 - . tudors. war of roses—aristocracy fought over who would control the monarchy

Shakespeare 1558-1603 - . by brandon pyle and logan o’bryan. hidden gems from the shakespeare period: phrases. “a

QuickBooks Error 1603 - Quickbooks installation or download can be a potential reason. windows registries are corrupted

POLICING IN SCOTLAND - . policing in scotland. aim : identify the key roles played by the police in scotland. success

Brewing in Scotland: - . a brief history of beer and its production. dallas iain; kelly will. ingredients. water malted

Isles in Scotland - . by the marvellous mull islanders (hubert,keir,bilge and stephanie) . how many islands are their in