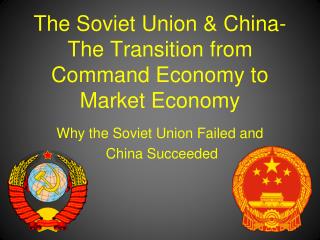 Market transition - . mapping business opportunities in china. since 199 6 china had moved away from command to market

The Command Economy - . command economies of the world. economic decisions are not always made by individuals, companies,

From Soviet Union to Russia - . why did the soviet economy fail?. quotas were difficult to reach because production

Stalin and the Soviet Economy Part 3 - . i. the second &amp; third five-year plans (what were the main strengths

Variants of Transition among Former Socialist Economies - . chapter x the former soviet union: the myth and reality of

China Colonialism to the Modern - . objective 1: summarize the history of china. objective 2: explain the difference