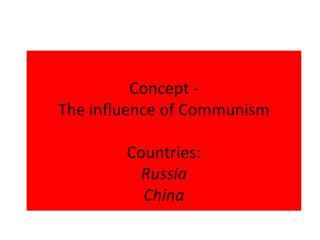 CHINA - . “ there lies a sleeping giant. let him sleep, for when he wakes, he will shake the world. - napoleon

WWI, Depression, New Deal, WWII - . a review. what countries were allies in world war i?. a. united states, france,

Capitalism, Socialism, and Communism - . capitalism. an economic system in which all or most of the means of production

Economics - . unit 2. why did communism collapse? capstone lesson 6. the collapse of communism in the ussr was one of

Concept: LOCATION - Ss7g1b locate on a world and regional political-physical map the countries of, democratic republic of

THE ROAD TO COMMUNISM IN CHINA - . the opium war. 1773 britain brought indian opium to china millions addicted and