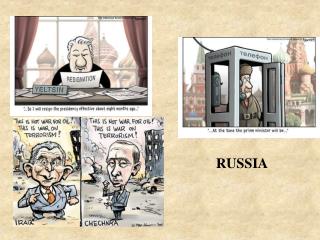 Russia &amp; Peter the Great - . russia is a riddle, wrapped in a mystery, inside an enigma. russia . background

The Rise of Russia - . c18 eqs: what factors led to the emergence of the russian empire? who led efforts to westernize

Revolution in Russia - . national collapse. world war i was devastating for russia russia’s lack of industrial

Marriage in Russia - . kozue aikawa megumi matsunaga mariko takahashi. climate in russia. different by places and it is

Hitler Turns on Russia - . why did hitler turn on russia?. russia would serve the german “master race” as a supplier

All about Russia - . facts on russia. the capital of russia is moscow. r ussia is one of the thirty most popular tourist

The presentation «The Russia» - . we live in beautiful country which named russia. there are a lot of rivers, lakes,