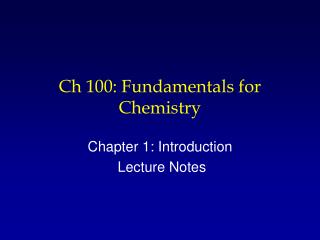 Ch 100: Fundamentals for Chemistry. Chapter 1: Introduction Lecture Notes. What is Chemistry?. Chemistry is considered to be the central science Chemistry is the study of matter Matter is the “stuff” that makes up the universe The fundamental questions of Chemistry are: