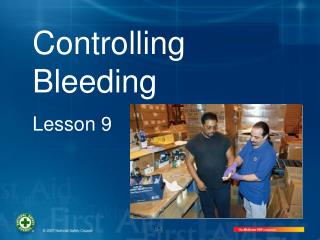 Controlling Bleeding - . introduction. the leading preventable cause of death on the battlefield is bleeding from an

BLEEDING - First aid. bleeding. eq: what are open and closed wounds? eq: how do you treat a bleeding wound?. open wounds.

BLEEDING - . first aid eq: what are the 4 types of open wounds?. bleeding. open wounds – bleeding through the

controlling - Is imprtant function of

Controlling - . boh4m. controlling. the process of monitoring performance and taking action to ensure the desired

CONTROLLING - . controlling . the process of evaluating and regulating ongoing activities to ensure that goals are

Anyone Can Have a Bleeding Disorder Lesson Plan - . learning objectives. i will understand the issues faced by

Basic First Aid Wounds and bleeding - . what is first aid. the objectives of first aid are: preserve life. prevent the