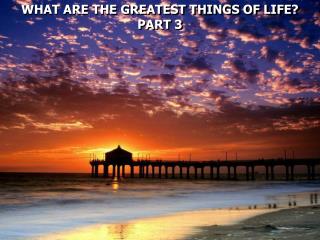 WHAT ARE THE GREATEST THINGS OF LIFE? PART 3. 1. Love 2. Our greatest purpose in life is to glorify our Father in heaven in everything that we do. 3. The greatest privileges we have in this life is the honor of being children of God. What are these things? - . look closely. take a guess. any new ideas?. the future. ladies &amp; gentlemen,

The Best Things In Life Are Free - . great paradox that which is the most expensive freely given redemption - 1 pet.

WHAT IS THE CHRISTIAN LIFE? PART 4 - . faith obedience repentance worship and devotion to god prayer spiritual growth and

Staying Afloat in the Storms of Life Part 3 - . if the fonts used aren’t loaded on your computer, you can replace the

The Greatest are the Servants - . matthew 23:11-12 . “ the greatest among you will be your servant . for whoever exalts

What are living things? - . 5 characteristic's that living thing share. made up of one or more cells respond to their

What are things made of? - . q what are the methods used to separate mixtures? a: these methods are known as physical

The Greatest Event In Life - . a glimpse into the traditional chinese wedding and a brief look at hu shih. david a smith.

WHAT AN IMPORTANT PART OF OUR LIFE!! - . lower east side prep. high school yu, zhen ni. why i take this class. i want to

What are living things made of? - . cells are the building blocks of life – they come in all shapes and sizes. some