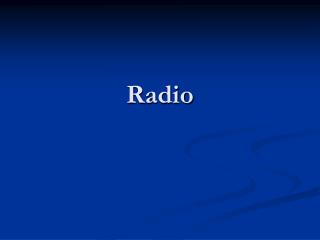 Radio. *Warning* Heavy Science Content Ahead. Baghdad battery – 250 BCE. Electricity was a heavy duty toy for decades, including Ben Franklin and his kite, people rubbing cat skins on glass or amber rods, spinning sulfur balls, and sparking everything and everyone in sight. Radio: - Radio is thriving because it connects with listeners in ways no other medium can match. radio:. delivers massive

Boss radio radio stream - Internet radio, web radio, or e-radio - these are basically some other terms used to refer to

Radio - . by. brittany jordan. who invented the