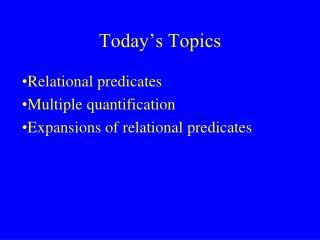 Today’s topics: Assimilation, Immigration - . for the quiz:. 1. put away all papers, cell phones, and clear off desks

Today’s Topics - . code of federal regulations (cfrs) parts 61 &amp; 91 airspace your aircraft you flying with a

Topics For Today - . quiz – caeg – autocad drawing number 18 is due lab report due on wednesday at the beginning of

Topics for today - . 5 key challenges to prepare for in retirement achieving a successful retirement putting an income

Topics for Today - . properties of light sunscreen and the ozone layer! quiz #4. readings for today. spectro-photometry: