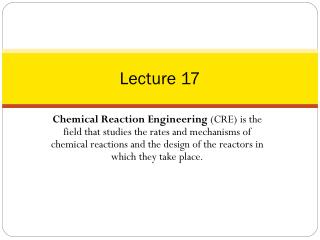 Lecture 17. Chemical Reaction Engineering (CRE) is the field that studies the rates and mechanisms of chemical reactions and the design of the reactors in which they take place. Web Lecture 17 Class Lecture 22–Thursday 4/4/2013. Introduction to Catalysts and Catalysis Interstage cooling Lecture 17 - . templates, part i. what is a template?. in short, it’s a way to define generic functionality on

Lecture 17 - The way of the wind is a strange, wild way. - ingram crockett glacial deposition, and wind . lecture 17.

Lecture 17 - . chapter 9 governance of the it function. final module: it leadership. it increasingly fundamental to