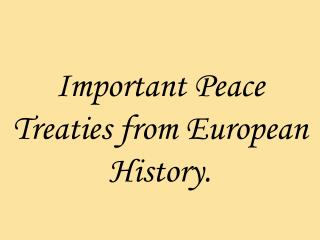 Important Peace Treaties from European History. What was the Peace Treaty that established Catholic and Lutheran religions in Germany according to ruler of the region ?. The Peace of Augsburg 1555. This peace established that the ruler’s religion sets the religion for that area. Important Peace Treaties from European History. - What was the peace treaty that established catholic and lutheran

The Peace Treaties - . flawed peace or the best possible at the time?. problems. how to: establish stable international

The Peace Treaties - . aim: to revise the paris pace conference. the big three. the fourteen points. wilson wanted a

From Ostpolitik towards a European Peace Order? - The federal republic of germany and european détente. ”signature of

The Paris Peace Conference &amp; The Treaties - . k.j. benoy. a sudden end. when the central powers collapsed, it

European History - . in one day. classical europe- 800-400 bc. greece became known as the “cradle of democracy” first

Treaties - . as a source of il. sources of international law. as outlined in article 38 of the icj: conventions /