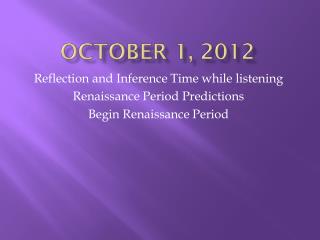 October 1, 2012 - For each of your songs?. part 2 identify:theme/general analysis [what is this song about?]tone [how

October 1, 2012 - . get out your articles that are making you an expert on the topic you have chosen. pick one that helps

Monday, October 1, 2012 - . what problems needed to be remedied today? -name at least 3 is anyone working to solve these

ENGLISH II OCTOBER 1, 2012 - . drop off “everyday use” worksheet on the stool before class begins! no warm-up today;

October 2012 - Chemical health and safety training and resources: information for grantees in the environmental workforce