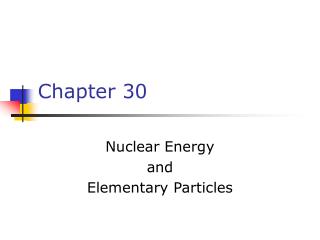 Chapter 30 - . the americas in the age of independence. the land of promise – the grayson family by william s.

Chapter 30 - . inductance. goals for chapter 30. to learn how current in one coil can induce an emf in another

Chapter 30 - . sources of the magnetic field. a whole picture helps. charge q as source. current i as source. gauss’s