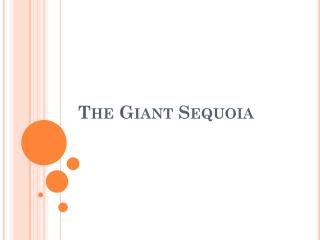 Stewards of the Sequoia - . trail preservation project program. one of stewards multiple use crews. before. after. more

Sequoia Middle School - . rti from a seed to a tree. agenda. preparing the soil planting the seed cultivation the

Sequoia National Park - . home of the biggest trees by: alexandria. about park. the size of the park is 631.35 square

Sequoia National Park - . home of the most biggest trees by: alexandria crouse. about park. the size of the park is

The Giant Panda - . els reuvekamp. what is a panda?. a black and white bear large lives in china distinct black spots on