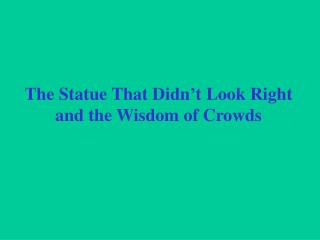 Primary push in New Hampshire - All across new hampshire, crowds are gathering to hear and see the democratic and

WISDOM - . moral wisdom or prudence may be defined as the proper connection among the end or goal of an action, the means

The Love of Wisdom - . steven b. cowan james s. spiegel. introduction to philosophy. what is philosophy?. philo + sophia

The Boy Who Didn’t Believe in Spring - . by: lucille clifton illustrated by: brinton turkle. an example of city

The Mysterious Giant of Barletta Vocabulary - . giant:. a huge, strong, imaginary creature that looks like a human.

History of World Religions - . wisdom. philosophy literally means “the love of wisdom.”. perspective. religion can be