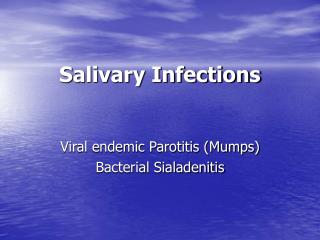 Salivary Infections. Viral endemic Parotitis (Mumps) Bacterial Sialadenitis. Mumps (Viral endemic parotitis). Mumps is an acute sialadenitis which caused by an RNA virus This RNA virus is the “paramxovirus” Other virus which can cause salivary infections are: Cytomegalovirus SALIVARY GLANDS - . objectives by the end of the lecture the student should be able to: describe the microscopic

SALIVARY GLANDS - . dr. jameela el- medany. objectives. by the end of this lecture the student should be able to :

Salivary glands - . objectives: enlist the salivary glands. define their location. discuss the parotid gland. where does

Salivary Glands Disease - Embryology. the parotid anlagen are the first to develop, followed by the submandibular gland,