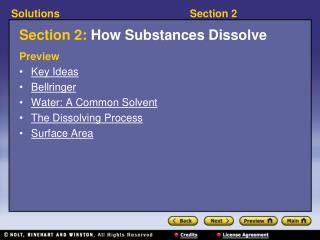 Section 2–2 - Properties of water . section 2–2. objective. this section describes the makeup of water molecules. it

Section 2 - . spain builds an empire. what is the scene?. when asked why the spanish traveled to the america’s, bernal

Section 2 - . environmental solutions. i can: • explain the importance of conservation. • describe the three rs . •

Section 2-2 - . histograms, frequency polygons ogives. histograms. the histogram is a graph that displays data by using

Section 2 - . living things need energy. i can: • describe the functions of producers, consumers, and decomposers in an

Section 2 - . a brief history of psychology. marmaduke sampson. studied “why crime occurs” believed behavior was the

Section 2 - . from the restoration to glorious revolution. review:. what is your thesis statement? remember that the

Section 2 - . desire for normalcy. key terms. *lease – to rent *isolationism – not to be involved in foreign affairs.

Warm-up: How do substances dissolve?