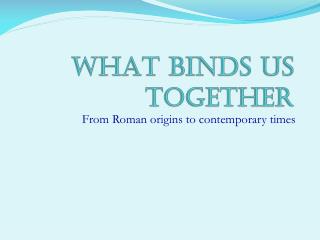 WHAT BINDS US TOGETHER. From Roman origins to contemporary times. from: Bartolomeo Capasso, Napoli Greco-romana , Società napoletana di storia patria, 1905. Activity - . introduction 1.) hydration ions do not act as independent particles in solvent (water) surrounded by a shell

True or False? - “so , you want to learn the force … help you i can. my ally is the force. and a powerful ally it is.

The Glue that binds us all - . probing the nature of gluonic matter with eic: the world’s first ea collider . raju

RECEPTORS - . cellular component to which the drug binds and through which initiates the

It plagues my mind day by day - . i constantly think about it. the regret binds me with its chains. the guilt has made me

Colossians 3.14-15 - . 13 bear with each other and forgive whatever grievances you may have against one another. forgive