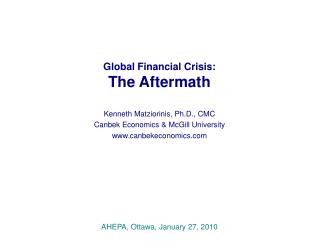 The Global Financial Crisis: Is It Like The Great Depression? Trento Economics Festival May 2009 - Overview by assaf

Annual Conference 2011 Financial Regulation in a Global Market: Moving Beyond the State - . session one - panel two

Economy &amp; markets after the financial crisis What have we learned and where are we heading? Economics, UiO,

Financial Crisis and the Future of the P/C Insurance Industry Challenges Amid the Global Economic Storm - . northwest

Finance and the Crisis Umberto Cherubini University of Bologna - . outline. how the crisis started securitization