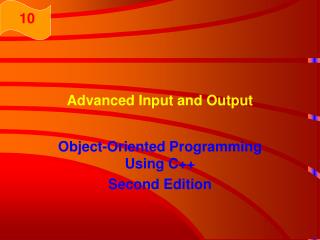 10. Advanced Input and Output. Object-Oriented Programming Using C++ Second Edition. 10. Objectives. In this chapter, you will learn: How cout and cin possess the same traits as other C++ objects How to use istream member functions, particularly get(), ignore(), and getline() Advanced Input/Output: Streams, Files - . week 7. i/o overview. i/o = input/output in this context it is input to and

Input and Output - . patt and patel ch. 8. computer system. i/o: connecting to outside world. so far, we’ve learned how

Input and Output - . what is input?. input is any data and instructions entered into the memory of a computer.

input and output - . what’s in