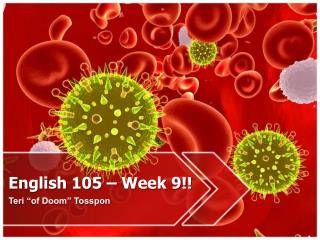 English 105 – Week 9!!. Teri “of Doom” Tosspon. Grammar Review. Read the student paper aloud to a partner. Identify each sentence as Sentence, Fragment, or Run on. Sentences have a subject, a verb, and a complete thought/idea. Circle & correct the misused words (there, their, they’re). English Matters - . why do we have to learn this?. probably the most commonly asked question in schools. . english

A Brief History of the English Language, - . or why english is hard to spell!. how did english get to england? . prepare