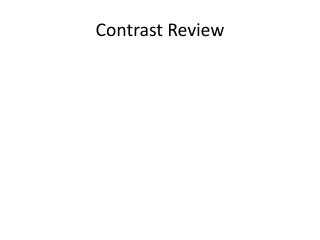 Contrast - A principle of art / design what is contrast ? different and opposite in art, contrast is used between

Contrast - . big title small aftermath. dark background light writing. if two things are not the same then you should

Contrast - Pg. 57b: compare and contrast: show how two things are both similar and different. compare. contrast.

Contrast - . draw attention to your page. contrast works with emphasis. no contrast is boring, and looks unorganized. the

Contrast - . word of the week. definition. contrast. . . to compare in order to show unlikeness or differences a striking

Contrast - . repetition. alignment. if things are different, make them different. visually interesting. you can use large

Contrast - . by: katie bocskor. don’t be a wimp. contrast. to be effective, it must be strong. purpose. 1. create

In contrast… - . european sales have increased 25% since the start of the global economic downturn. germany – cap

Radiographic Contrast - . contrast. the range of density variation among the light and dark areas on a radiographic