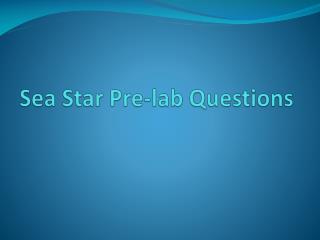 Sea Star - Sea stars (also known as starfish) are spiny, hard-skinned animals that live on the rocky sea floor. these

Agenda Catalyst Pre-lab Questions Objective - Catalyst: (put this in the top margin above the first page of your lab)

Sea star facts - Over on the island in the shallow blue tied lived an old mother sea star and her little stars nine.

Pre lab - . investigation question: what variables affect the passage of molecules through a cell membrane?. part i.

Salinity Pre Lab - . we got to know the stuff before we do it!. do now: you need to sit quietly and get ready for your