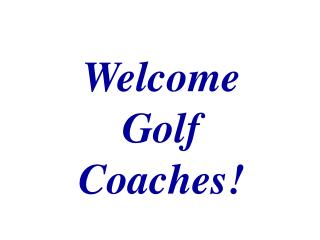 Welcome Coaches - . some key coaching concepts. 1. control the width move out wide to open the attacking width and draw

Welcome Marlborough Coaches - . coaching overview. principles of coaching. it is imperative that coaches take into

Welcome Back Coaches!!! - . random thoughts about work…. ….and life in general . the nice thing about teamwork is you

Welcome to our powerpoint presentation on - . mammals. lets learn about mammals. this is a abyssinian colobus monkey.