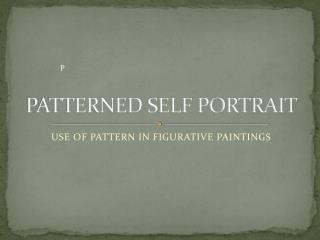 PATTERNED SELF PORTRAIT. P. USE OF PATTERN IN FIGURATIVE PAINTINGS. ADRIANA CZERNIN. Adriana Czernin is a contemporary artist, born in Bulgaria in 1969. She lives and works in Vienna, Austria, once home of Klimt and the Jugendstil movement. Self Portrait - . tim baletskiy. cut one of these out because i like subway, and in the picture its an advertisment at

Self Portrait - . artists like to draw themselves! this is called a self portrait . self portrait. a mirror is an

Self Portrait - . sierra woodall. picture 1 – burton board. i took the colorful side of the board and put that in my

SELF PORTRAIT - . using visual symbols and metaphors to express something about yourself frida kahlo thinking of

Self Portrait - . i am what i… exploring identity through objects. what is a self portrait?. what would you think about

Self-Portrait Series - . what’s the difference between a “ portrait ” and a “ picture ?”. what makes a

Reflective Self Portrait - . portraits. get a mirror and a piece of paper and something to draw with. what do you need to

Blurry Self Portrait - . …a painting. step 1: start with a blurry photo of yourself or use photoshop to make it blurry.

Gauguin, Self Portrait - . gauguin, vision after the sermon. munch, the scream. redon, the

Self-Portrait Photography - . get out your sketchbook! you will be taking notes!. who are