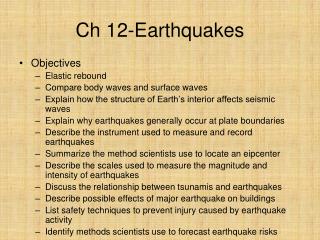 Ch 15 Earthquakes - . i. earthquake – the shaking of earth’s crust caused by a release of energy; vibrations made

September 12, 2007 Earthquakes - . took place in southern sumatra magnitude of 8.4, followed by another of a magnitude of