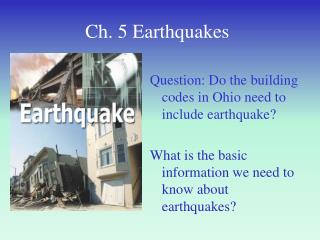 Ch. 5 Earthquakes. Question: Do the building codes in Ohio need to include earthquake? What is the basic information we need to know about earthquakes?. What are Earthquakes?. The shaking or trembling caused by the sudden release of energy