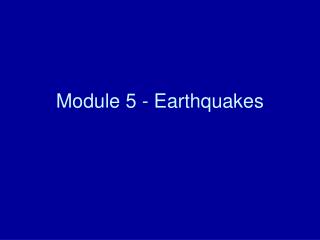 Topic 5: Earthquakes - . do we live in an earthquake area?. where in canada do earthquakes happen?. to study earthquakes

Module 5 - . prevention. what is prevention?. minimizing the risk of moving alien species to countries or ecosystems

Module 5 - . damage control. terminal objectives. upon the successful completion of this module , participants will be

Module 5 - . 十三中 刘建莉. module 5. my school day. unit 3. language in use. language practice. we have chinese at

Module 5 - . negation. avoid excessive negation. you should have no more than two negatives in a sentence. x don’t fail