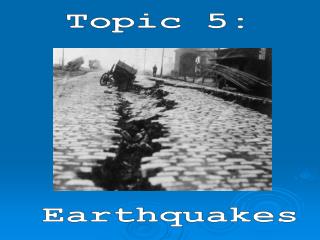 Topic 5: Earthquakes. Do we live in an Earthquake area?. Where in Canada do earthquakes happen?. To study earthquakes scientists use seismographs. They measure the earth’s movement. They read the seismograms. They have to be attached to bedrock In order to feel the Vibrations that Topic 5 - . synchronization and costs for shared memory. “.... you will be assimilated. resistance is futile.“ star

TOPIC 5 - . fed policy and money markets. outline. what is money? what does affect the supply of money ? how the banking