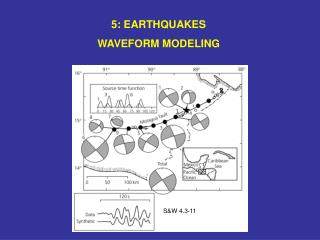 5: EARTHQUAKES WAVEFORM MODELING. S&W 4.3-11. SOMETIMES FIRST MOTIONS DON’T CONSTRAIN FOCAL MECHANISM Especially likely when Few nearby stations, as in the oceans, so arrivals are near center of focal sphere Unified Modeling Language - . a language for specifying , constructing , visualizing and documenting the artifacts of a