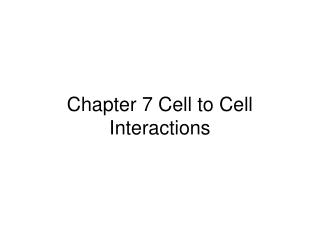 Cell-to-Cell Interactions - 35. cell-to-cell interactions. cells can identify each other by cell surface markers.

CELL -CELL INTERACTIONS CH 11 - . explain why this is the result of cell to cell communication. what characteristics are

Chapter 7: CELL MEMBRANE - . membranes = “the edge of life”. what must a membrane do?. let some things leave cell /

The Cell Chapter 7 - The cell chapter 7. discovery of the cell robert hooke: 1665-1stperson to see a cell used a

Boolean Approaches to Genome-Cell Interactions - . review, development, examples. what is it that we want to know?

Chapter 7. The Cell: Chloroplasts - . overview. chloroplasts are organelles that convert energy to forms that cells can

Eukaryotic Cell Structure Chapter 7 - . section 7–2. comparing a cell to a factory it. what is an organelle? is a