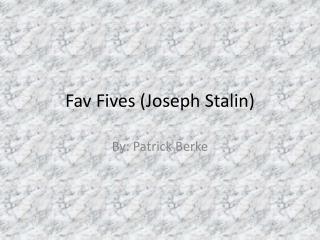 Fav Fives (Joseph Stalin). By: Patrick Berke. Hitler. Hitler and him were mean leaders that wanted to take over the world. Moctezuma. They both ruled their people and their land. Felipe Calderon. Both run their land and aren’t very good leaders. Castro. Both were dictators of their land. Joseph – An Example of God’s Providence - . does the lord look ahead and provide for his children today?.

Stalin and the USSR - . history 12 ms leslie. who to lead the ussr?. moderates - wanted to continue nep and slowly build

Biology 1010C LSSC Dr. Joseph Silver - . in this chapter we will learn about the chemical building blocks of