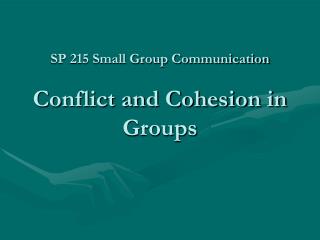 SP 215 Small Group Communication Conflict and Cohesion in Groups. Conflict in Groups. Conflict The disagreement and disharmony that occurs in groups when differences are expressed regarding ideas, methods, and/or members. Transform climates leads to managing conflict. What is conflict?. 3. Conflict in Small Groups - . www.peacemaker.net. what is conflict?. a hazard? an obstacle? an opportunity definition: a

COMMUNICATION in SMALL GROUPS - . instead of focusing on personal utility-maximization, small-group communication

Cohesion and Climate in the Small Group - . the importance of cohesion a definition of comm. climate six dimensions of

Small Group Communication - . what is a group?. a collection of individuals who influence one another, have a common

SMALL GROUP COMMUNICATION - . how big is a small group?. 5-7 is recommended for greatest productivity 20 is largest

Small Group Communication - . what is small-group communication?. the interaction between three to nine people who are

Small Group Communication - . why should you learn about small groups?. to meet needs groups are everywhere to learn a

Conflict &amp; Cohesion - . conflict is in our entertainment…. family businesses shut their doors when wal-mart