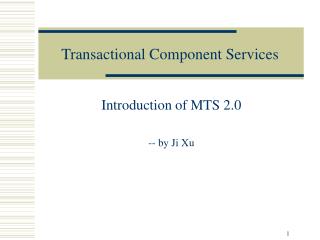 Transactional Component Services. Introduction of MTS 2.0 -- by Ji Xu. What is MTS. MTS stands for Microsoft Transaction Server. MTS is the best technology for building server-centered applications on Windows NT Transactional Analysis - . how we spend our time. transactional analysis. a model for explaining why and how: people

Transactional certainty - . in germany, how do you know who owns land?. publicity in real property transactions land