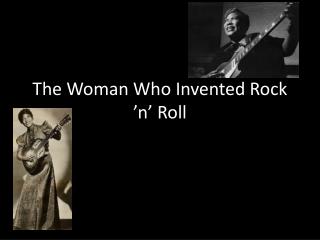 The Woman Who Invented Rock ’n’ Roll. “When Chuck Berry came out, I had seen all that” Gospel Singer Geraldine Gay Hambric. A survey of five major text books used to teach the History of Rock or American Popular Music turns up only one mention of Sister Rosetta Tharpe. Childhood. Rock and Roll Content: Creating Big Hits - Here's a study of 11 legends of rock and roll and how they created signature

Feminism - . as theory and practice. patriarchy (95). system of male dominance. social construction of woman. woman as

The Dome of the Rock - . the dome of the rock is a shrine built over a large stone in the center of jerusalem. this holy