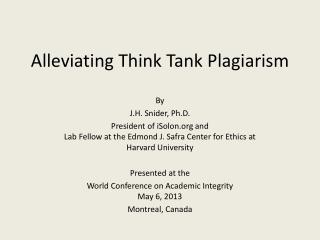 Alleviating Think Tank Plagiarism. By J.H. Snider, Ph.D. President of iSolon.org and Lab Fellow at the Edmond J. Safra Center for Ethics at Harvard University Presented at the World Conference on Academic Integrity May 6, 2013 Montreal, Canada. Outline. Why think tanks are important Think Tank Time - . attention!! your class has been selected to work in engineering teams to complete an important

APPR Think Tank - . none of us is as smart as all of us when we decide to be smart together. appr think tank. true or