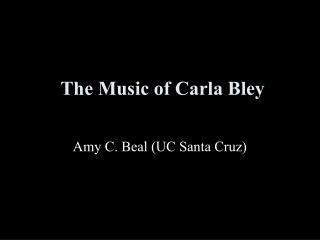 The Adventures of Carla Calcite

The Many Faces of CARLa Data - Mark s hahn, level 2 technical support, zsecure august 18, 2008. the many faces of

The Music of - . india. intro to india. india is in southern asia its bordering countries are pakistan, china,

Carla Harkin - Isolation &amp; identification of novel microorganisms for the treatment of raw crustacean waste to

The Neuroscience of Music - . main points. music is like language characterized by rhythmic sequential sounds has syntax:

The Elements of Music

The Elements of Music - . basic terms to understand as a song leader. sound: pitch, dynamics, and tone color. pitch - the

The Influence of Music - . by casey orman. the power of music. music has the ability to bring out a range of emotions

The Perception of Music - Presentation by joanne emmanuel. the perception of music. by h. c. longuet-higgins, frs. “the