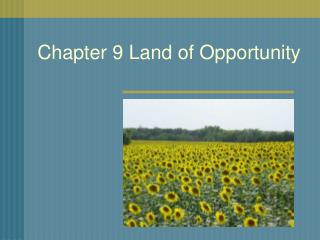 Chapter 9 Land of Opportunity. Immigrants to Kansas. Immigrant: One who leaves a country to settle in another country Assimilation: The process of absorbing a new group into the culture of those already there CHAPTER - 7 CONSERVATION OF PLANTS AND ANIMALS - . 1) deforestation :-. the clearing of forests and using the land for

Chapter 23 - . section 1 – war in europe the more land you have, the stronger your country is. why were they already

Unit 4: Land and Resource Use - . chapter 11 agriculture, aquaculture, and the environment. agroecosystems. are