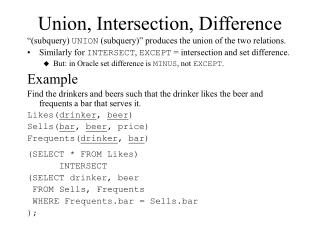 Union, Intersection, Difference. “(subquery) UNION (subquery)” produces the union of the two relations. Similarly for INTERSECT , EXCEPT = intersection and set difference. But: in Oracle set difference is MINUS , not EXCEPT . Example

Section 2.3 Set Operations and Cartesian Products - Intersections of sets the intersection of set a and b, written is the

Section 2.2 - Math in our world. section 2.2. subsets and set operations. learning objectives. define the complement of a

Intersections, Unions, and Compound Inequalities - . two inequalities joined by the word “and” or the word “or”

Relational Algebra - . operations in the relational model. these operation can be expressed in an algebra, called

2.3 Set Operations Objectives: - . be able to p erform the set operations of union, intersection, complement, and

Set Operations - . union. definition : the union of sets a and b , denoted by a ∪ b, contains those elements that are