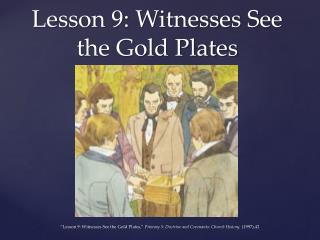 Tectonic Plates - Objective: to learn how tectonic plates move and what evidence we have for continental drift. tectonic

An Examination of The Jehovah’s Witnesses - . by prof. dennis m. swanson the master’s seminary. importance of this

KC License Plates Dennis Cass, Chairman - . kc license plates. like it or not, you car becomes an extension of your

Boundaries, Stresses, and Faults OH MY! - . how do geologic events change and shape earth’s surface?. remember…. the

Plate Tectonics - . earth science ch. 17. plate tectonics. earth’s crust is “broken” into many plates there are 7

Gold - . jt sampson. gold’s history. gold has been around since ancient times and there is no origin on its name. .

Lesson 50 - . “no more room on the plates” jarom and omni. jarom. great grandson of sariah and lehi grandson of jacob

Vehicle Witnesses as a Service: Leveraging Vehicles as Witnesses on the Road in VANET Clouds - . authors: rasheed hussain

The gold fields - . by mitchell green. my questions. what is gold. different types of gold . what is gold used for today.

Chapter 7 Lesson 2 Earthquakes - . what is an earthquake?. a sudden trembling of the ground caused by movement happening

Plates on the Move - Geology rocks!. plates on the move. 6es science std: 1c chapter 6 – section 3. we have identified

Gold (Au) - . the symbol for gold on the periodic table is ‘au’. gold. the discoverer of gold is unknown. although it