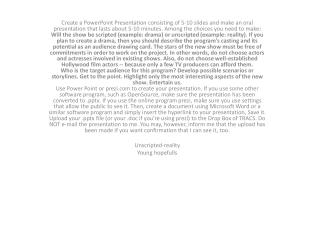 10 Things your Audience Hates About your Presentation - See it with animations! https://vimeo.com/179236019 it’s

We Believe in God: The Father - . god, father and creator the god of our faith general audience of july 24, 1985 god who

English Language - . section a. audience. key aspects that would have been chosen to appeal to the target market: