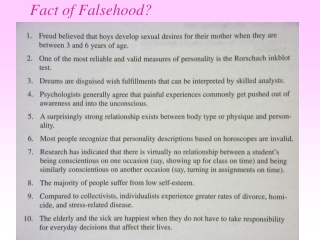 Fact and Opinion - . fact or opinion?. fact a sentence that is true, can be proven, or has actually happened opinion what

Fact or Falsehood - Lowly animals, like sea slugs, behave by instinct and are incapable of learning.. truefalse. . humans

Building Western’s Fact Book - . a guide through the process of building a fact book. presented by keith stiles qep

Fact or Opinion - . l.krauser. fact. the sun is a renewable resource. opinion. mr. southard is nice. fact. a

Research Methods: Thinking Critically with Psychological Science - . the need for psychology science. do now. fact or