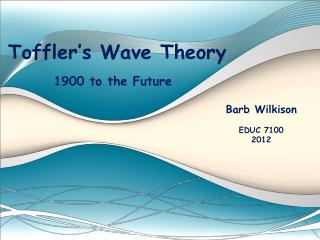 1900 to the Future. Toffler’s Wave Theory. Barb Wilkison EDUC 7100 2012. In his 1980 book The Third Wave , Alvin Toffler presented his theory that our development as a society has evolved through three waves. The Agricultural Wave The Industrial Wave The Information Wave Waves - . by neil bronks. some definitions…. crest. trough. 1) amplitude – this is height of the wave. 2) wavelength