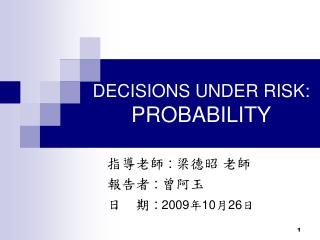 INTERNATIONAL FINANCE - . introduction. what are we going to learn in this chapter ?. what kinds of risks does

Probability - . sets. a set is a collection of objects. these objects could be discrete singletons (such as the

What is the probability that the spinner will land on blue? - . in this lesson you will learn how to calculate the