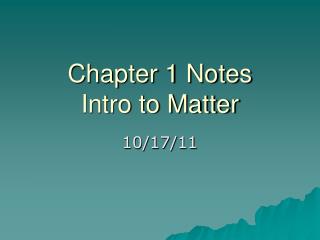 Chapter 1 Notes Intro to Matter. 10/17/11. I) Describing Matter. Matter -anything that has mass and takes up space. Properties of matter. 3 states of matter Solid Liquid Gas. Characteristic properties – these are things that never change. Ex. Diamonds. Boiling point