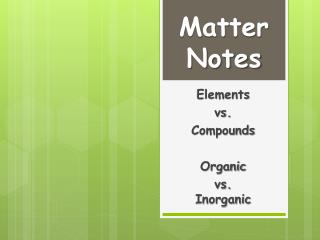 Matter Notes. Elements vs. Compounds Organic vs. Inorganic. Matter. Matter is anything that takes up space and has mass . Matter can be big or small. All matter is composed of atoms. Elements. CHEMISTRY NOTES - MATTER - . matter – anything that has mass and volume. matter is made up of tiny particles called

Notes on matter and states of matter - . october 24, 2017. what is matter?. anything that has mass and takes up space

Matter, Measurements, and Calculations Notes - . (chapter 1 and 2). chemistry – the study of

Classification of Matter– Interactive Notes - . 1. there are physical properties that can be measured. they are:.

Classification of Matter Activity and Notes - . objective today i will be able to: apply knowledge of the intro to

Unit 1- States of Matter Notes - . in relationship to density. remembering the first day of school. “knowing the

States of Matter Density Buoyancy Viscosity NOTES!!! - . what is matter?. anything that has mass and takes up space so